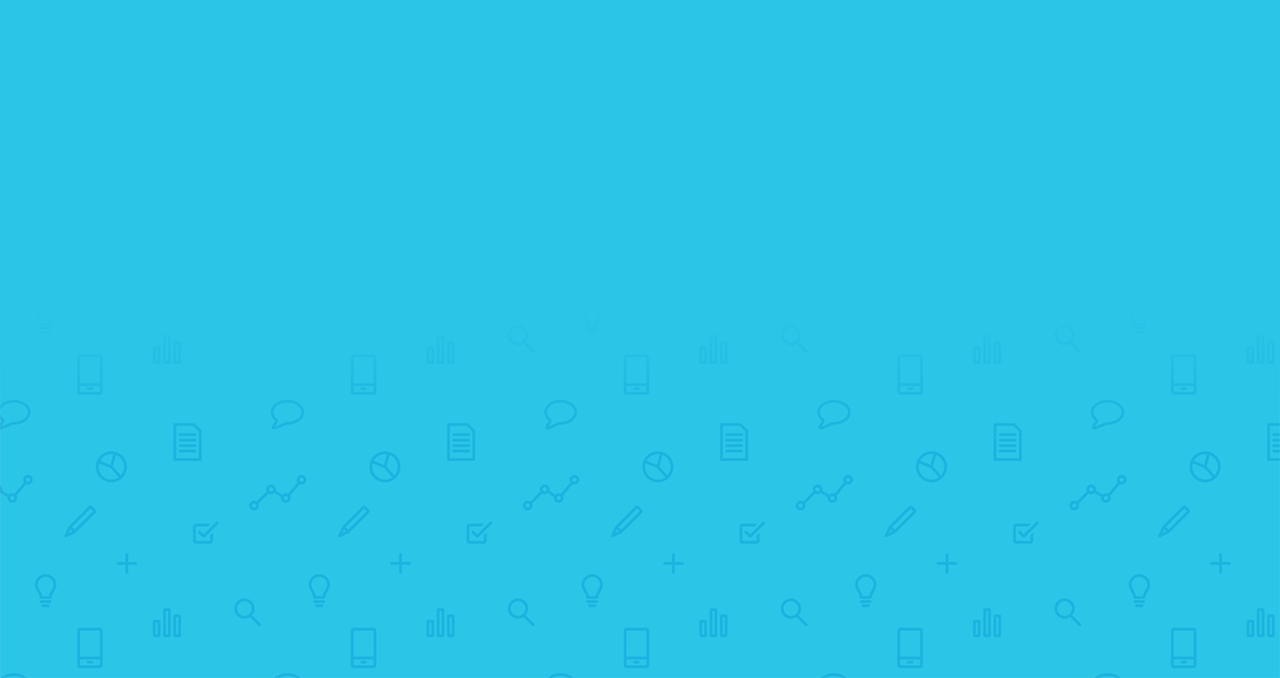 TapResearch is always looking for cutting-edge use cases and partners to leverage our large scale audience engagement network to deliver better insights.  We are excited about expanding our efforts in political and opinion polling.

TX-27 has not been at the forefront of the news. Only few know that this minority-majority district holds special elections on Saturday, June 30th. TapResearch has teamed up with PredictWise to shed light on the political compass in this district, leveraging TapResearch’s innovative ways to collect data (randomly targeting cell-phone-level ad IDs) to quickly conduct polling at scale, as well as PredictWise’s proven methodology. And, while we find that the district is out of reach for Democratic challenger Eric Holguin, there is some hunger for progressive policies here.

Demographically, the district would be an obvious target for Democrats – 50% of residents are Hispanic in this district, consisting of Corpus Christi and Victoria up to Bastrop County near Austin and Wharton County near Houston. And, the most recent Representative, Republican Blake Farenthold, resigned in disgrace over sexual harassment allegations, on April 6, 2018. But, public polling has been non-existent here, and the Democratic Congressional Campaign Committee (DCCC), the organization with the goal to elect Democrats to Congress, has not exactly made this district a priority.

But, as a our new PredictWise/TapResearch poll shows (full data here): The district has hunger for some progressive policies, especially around taxation and gun regulation. First things first: Cook, the standard bearer of Congressional forecasting, has this district as solidly Republican. Our poll agrees: We have Republican candidate Michael Cloud far ahead in the two-party vote-share (65% to 31%). Nothing to see here for Democrats.

But as opposed to other polling, our poll goes deeper than the traditional horse-race, and dissects likely voters in TX-27 on relevant political issues of the day. Take gun regulation for example: Over 50%, a clear majority of Texans residing in this district, support restricting the amount of bullets. And, that number is still above 50% for Republicans, with 71% of Democrats in support (Independents are less inclined to support legislation to restrict the amount of bullets in firearms, coming in at 30% support). 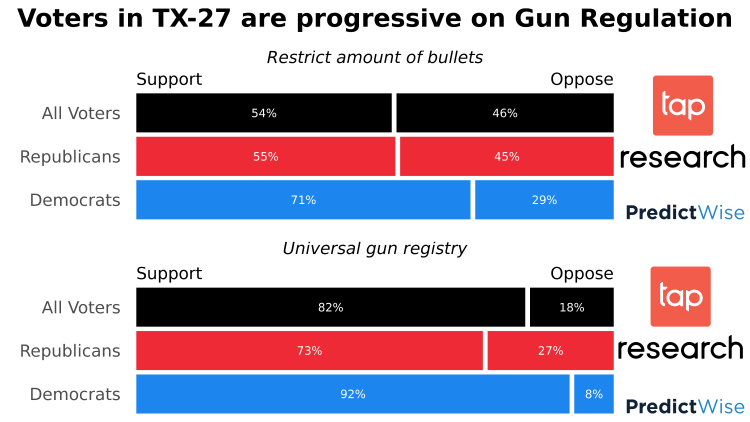 On another issue front, Texans residing in this district are more mixed: immigration. While Dreamers enjoy support among likely voters – 64% of overall voters and a majority (54%) of Republicans support a pathway to citizenship in this district – only a small minority (9%) support an increase in the flow of legal immigration. 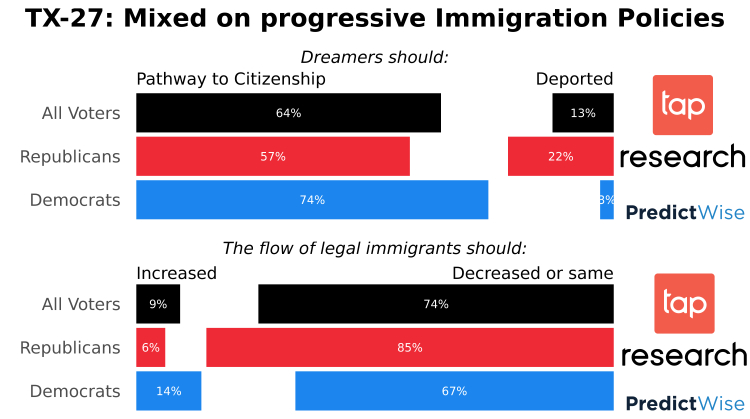 On economic issues, however, Texans in this coastal district inhibit a strong desire for more progressive policies: 63% (and 59% of Republicans) support increasing taxes for households making more than $250,000 a year, and over 90% (Democrats and Republicans alike) support tax increases for big corporations. And, a majority of Texans in this district believe that unions are good for them – and likely would have taken issue with the recent Supreme Court ruling on this matter. 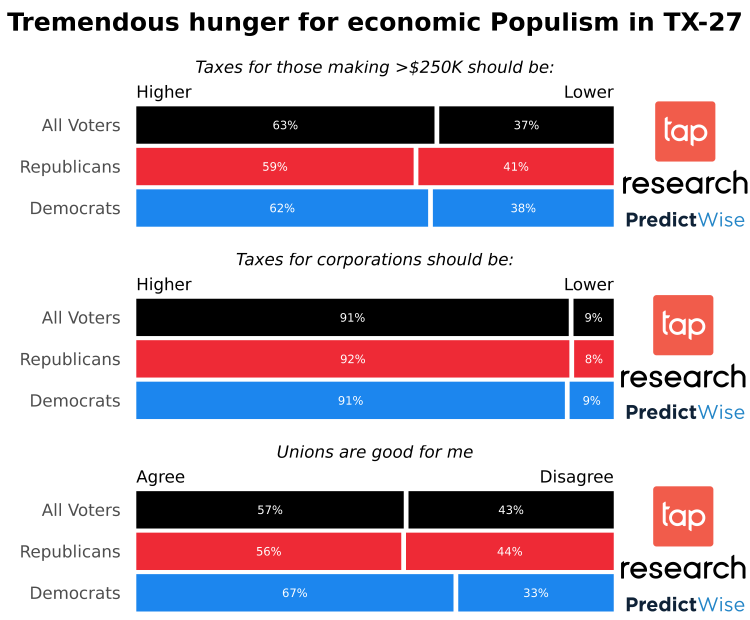 Full data here. The insights presented here are a mix of PredictWise baseline data and a fresh set of respondents (N-200 likely voters, collected from 06/12 through 06/28) collected via TapResearch. Then estimates are created of public opinion using the most bleeding edge analytics of modeling and post-stratification (affectionately known as MRP+).

Last week Instagram launched its new “Polls” feature for stories and my nerd-heart skipped a beat. Instagram is my social-media drug-of-choice, and I love market research, so I just had to try it out. 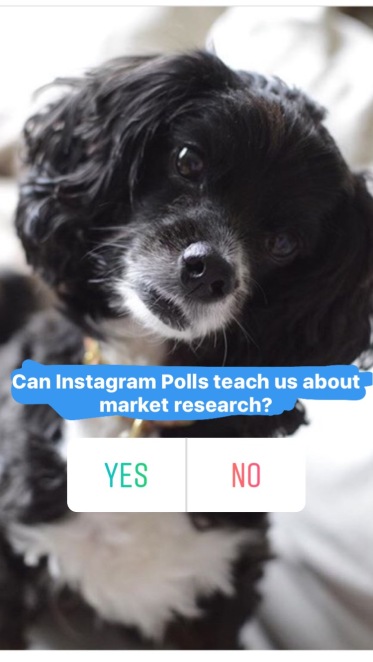 Of course I was disappointed at the lack of functionality– I had a hard time even finding my data after a poll. You can only ask one question with two answer choices, and polls are only visible to your story’s audience. It’s obvious that Instagram’s Polls are more geared towards social interaction than research.

At first I was annoyed– then I began taking polls myself. I found it to be a fun and seamless way to engage with friends, corporations, and even celebrities. I started looking at Instagram polls from the respondent’s perspective, and I realized that this feature’s true value to market researchers isn’t the what– it’s the why.

Here are 5 Lessons for Market Researchers from my experience with Instagram Polls:

END_OF_DOCUMENT_TOKEN_TO_BE_REPLACED 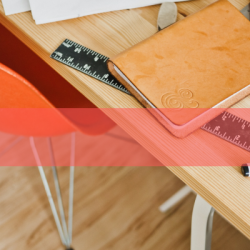 If you haven’t noticed, the internet has gone crazy for DIY.

Pinterest is full of life-hacks, like how to cook smores on a rake (yum?). With Youtube, you can become an expert on anything from roller-skating to building a house. Now we have the choice to tackle projects ourselves instead of using middlemen or opting for one-size-fits-all solutions.

Here at TapResearch, we welcome this can-do attitude. That’s why we are putting the power in your hands with our new Self-Service Tool and Survey Builder. Going DIY allows you to set-up, target, and manage your own research projects–on your schedule.

END_OF_DOCUMENT_TOKEN_TO_BE_REPLACED

Mobile Research: The Next Chapter

Research has certainly come a long way. From in-person interviews, to mailers, to phone centers; researchers have always been quick to harness new technologies. Yes, we still get the occasional phone survey, but research has largely relocated to the internet.

In the past, joining an online survey panel became a great way to make a few extra bucks and researchers gained direct access to respondents. But, these traditional panels aren’t without issues–

To avoid these issues, many researchers are turning to mobile research. Mobile is the next chapter; and what better way to reach people than with the apps they use everyday?