If you’re a F2P game publisher, player engagement and retention are always top of mind for you. How do you retain your players and keep them engaged without turning them off from your game by destroying their playing experience with disruptive, obnoxious in-game ads?

Ultimately, your goal is to strike the right balance for all parties involved. With the right app monetization strategy, players earn rewards with minimal disruption to their playing experience. The advertiser gets a better ROI. And you provide your player a great gaming experience which translates into a lower churn, higher retention, better NPS and CSAT scores, and higher ARPDAU. Everyone wins!

Well, the other day I was playing a mobile game while watching tv when I realized I rarely (if ever) play games with the sound on. It made me wonder if I’m playing my game with the sound off, how many other people play with their sound off? Do developers know what their user preferences are given the amount of money & effort that goes into game music and sound effects?

So I fired up TapResearch’s online survey platform Market Insights and ran a survey to better understand players' thoughts and habits while they play. Let’s take a look.

We surveyed 2,400 everyday people (census balanced). The best part of the course is because our platform is powered by our proprietary audience that is entirely made up of mobile app gamers, we can get insights from the very same people you want to hear from the most - game players.

I can’t speak for all gamers, but I can say with confidence that I enjoy watching tv or listening to music when I’m playing mobile games. So I wondered what else people like to do while playing their favorite game. I was surprised to find that some listen to audiobooks and podcasts, both of which require some mental dedication.

I fall in the 60%+ of people who listen to music or watch TV while playing. You can see the full results below. Perhaps the biggest surprise was that only 8% of gamers we surveyed said they play with game sound on.

Player Engagement With Other Activities While Playing Games

Player Engagement With Other Activities by Game Type 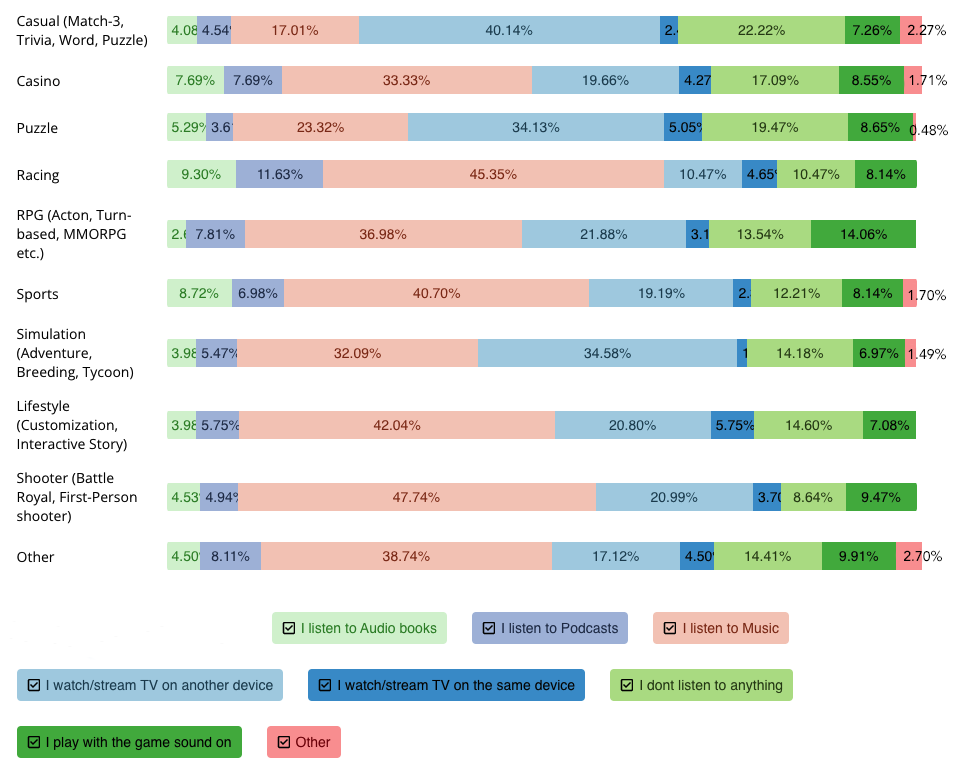 Type of Game and Sound On/Off

Influence Of Age On Sound Preference

Impact of Playing Frequency on Sound

Perhaps one of the most interesting insights from this survey is that it shows that there is a correlation between the frequency of game sessions and the length of each session. 45% of respondents indicated they play more than 6 times per day, with 28% playing more than 10 sessions, and 66% playing 9 mins. or more per session.

Correlation Between Playing Frequency and Length of Each Session

The results also show that the more frequently they play, and the longer the duration of each session, the more likely they are to have music and sound effects on.

Additionally, it’s interesting to note that 58% of gamers who rarely or never have their device sound on while playing a game have also never made an in-game purchase. This is something to think about when considering an app monetization strategy.

I’m obviously part of the larger group who enjoys watching tv or listening to music while playing my games. The biggest surprise, even for me, was that over 91% of the respondents indicated they play their games with sound off - a staggering statistic by anyone’s measure. If you’re interested in the full survey results, you can view them here.