Time to ‘Infuse’ the Soda Market with Something New!

Since 1999, soda consumption in the United States has been on a steady decline. Dropping from a peak in 1999 of 49.7 gallons consumed on average per person to a low of 40 gallons in 2020. (IBISWorld) Most consumers may not be aware of this important statistic, but it is certain that the leading soft drink manufacturers like PepsiCo and The Coca Cola Company are.

Coupling that unnerving statistic with the recent success of Starbucks Nitro Cold Brew, thanks to PepsiCo and Starbucks’ formation of the North American Coffee Partnership (NACP) in 1994, it seems that the next step for PepsiCo was a no-brainer  - it was time for the infusion of a never-been-done-before product in the soda market - until now.

Introducing Nitro Pepsi
Companies like Pepsi and Coca-Cola are constantly exploring and expanding their product lines to box the other out in the hope of increasing market share and of course, profitability.

The first-ever nitrogen-infused cola, Nitro Pepsi was launched nationwide on March 28, 2022. Instead of infusing the drink with carbon dioxide, which gives it that intense fizzy carbonation, Nitro Pepsi is infused with Nitrogen. This infusion gives Nitro Pepsi a smooth, cream-like top without the heavy fizz typically associated with soda pop; giving it a smoother, creamier taste, all made possible by a widget placed at the bottom of each can that infuses nitrogen into the drink like the Guinness beer.

Using the power of TapResearch’s new Market Insights solution, this survey reached 1,000 everyday consumers in the US (census balanced), revealing some early, but interesting consumer awareness and attitude towards the new Nitro Pepsi product.

Nitro Pepsi Awareness
Incredibly, of the 1,000 people surveyed, 57% were not aware of the new Pepsi Nitro product and awareness declined among the older age groups. With the popularity of nitro-infused beverages on the rise, you can’t help but look at this as a missed opportunity.

More startling than the idea that of the 43% that said they are aware of Pepsi Nitro, is the fact that only 38% have actually tried it. This could be due to the fact that the product is not yet available or accessible everywhere across the country. Again, it appears that there is an opportunity for PepsiCo to create additional promotional and marketing campaigns to increase general awareness around this new product and increase distribution channels to ease access for consumers.

Consumer Attitudes
While nitro-infused Pepsi may not be for everyone, the survey indicates that it is clearly for many. Of the 38% of people who said have tried it, a whopping 80% said they somewhat liked or liked the new product. So it appears, with Nitro Pepsi, PepsiCo might be onto something big. 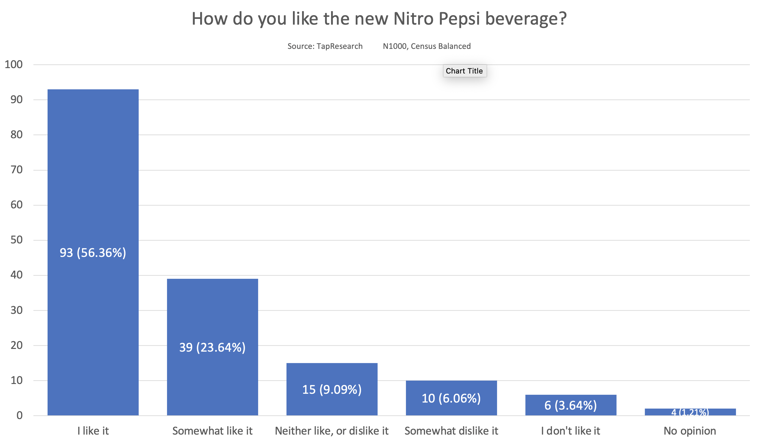 Interestingly, of the 1,000 people surveyed, those who said they would purchase Nitro Pepsi in the next month (including those who have already tried Nitro Pepsi), shook out as follows: 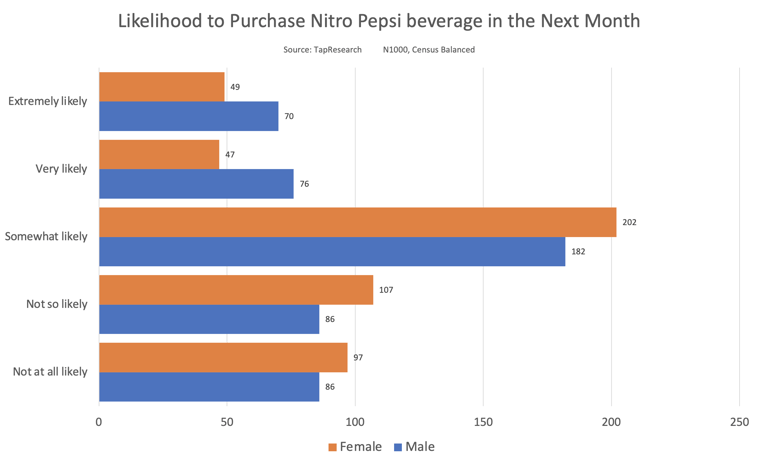 While roughly 6 out of 10 said they are likely or somewhat likely to purchase the product, with the right marketing effort to boost product awareness and increase its appeal, there appears to be obvious evidence suggesting Pepsi can turn those ‘somewhat likely’ people into ‘likely’ consumers and maybe even change the mind of a few ‘no’s’ along the way.

Most Important Attributes Impacting Purchasing Decisions
Not surprisingly, the higher price of Nitro Pepsi was the top factor for 38% of the respondents who declared they will not purchase the product within the next month, followed by ingredients at 16%, while availability and access to the product at local stores followed closely at 13%. 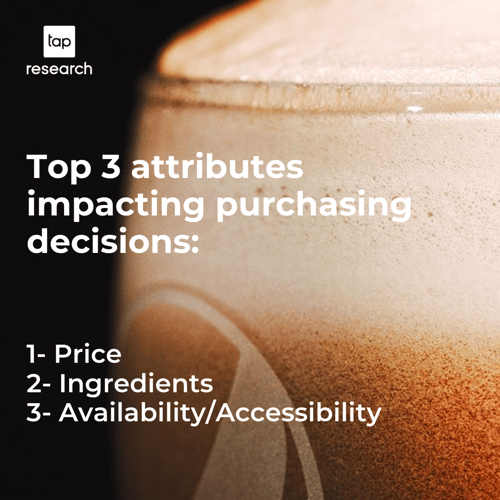 Though very early, it’s clear that Pepsi hasn’t made the impression upon consumers that they might have hoped in order to help Nitro Pepsi take off out of the gates. The good news is it’s still early. And while more research and analysis can be done, a quick market research survey like this uncovered the fact that there are plenty of opportunities to build brand awareness and drive demand for Nitro Pepsi.

Whether you’re running a quick pulse check on your target audience or implementing a continuous, weekly tracking system of your brand’s vital health metrics, TapResearch gives you the ability to quickly reach over 20 million real consumers instead of professional panelists, with access to 60+ profiling data points.

TapResearch provides marketers and researchers real-time actionable insights with easy-to-understand, shareable data. All at a fraction of the cost, resources, and time of traditional research methods. To discuss your next market research project with one of our research experts or to easily start your next survey project, create your FREE account here or contact our team for a custom plan tailored to your needs at sales@tapresearch.com.

Opportunities in the Baby Food Market

Super Bowl Battle of the Snacks: Frito-Lay vs Pringles